Welcome to the start of another very exciting week.

To kick us off into overdrive on the Author Interview series, it gives me the greatest pleasure to introduce author Emmy Gatrell, as she spills the beans on her wonderful worlds, enchanting books and gripping stories, along with giving us her own tips that help her writing craft.

Time to buckle up and strap yourself in for an amazing ride – enjoy the show.

Hi there Emmy, thank you for taking the time to be our featured guest here today.

Thank you so much for having me!

Let’s start with your Daearen Realms series of books. You just published the third one in the series in March this year. I’m fascinated by your world and what sits behind it, when it comes to science and magic. Your covers are also exquisite and your titles are very unique. Please can you elaborate further as to what the Daearen Realms are all about, what character arcs we are going to encounter across the course of the three books (do you have different protagonists in any of the books) and lastly regarding the significance of the title names, is this a language that your characters speak in the novels?

“Daearen isn’t much different than the human world. Imagine a world where science is replaced with magic,” Lilly of the Air Fey ~ Meanmna: Book One of the Daearen Realms
The Daearen Realms exists alongside Earth, and the two are linked together if a delicate balance isn’t maintained within it, mostly having to do with whomever is ruling the realms and the balance between light and dark magic, it affects Earth in the form of natural disasters and unrest.

Daearen encompasses five separate realms; Meanmna the Spirit Realm, Bienn-Theine the Fire Realm, Eitlean the Air Realm, Hasani the Water Realm, and Pozzolana the Earth Realm. Each has its own form of magic, landscape, problems, protagonist(s) and antagonist(s). Each realm will have its book, and the story told through a different POV. Well, the sixth book, Daearen will be told by Sarette who also tells us the story of Meanmna: Book One of the Daearen Realms. Each story follows one fey’s journey of self-discovery while battling the forces of evil trying to take over the realms.

In Book One Meanmna we meet Sarette. An average human teenage girl just trying to find her place in the world but discovers she’s so much more. She’s, in fact, a fey princess destined to leave everyone and everything she loves behind to become the Spirit Queen of the Daearen Realms. If she doesn’t, unbalance will affect the realms and Earth as well. So, she doesn’t get much of a choice in the matter. The story follows her journey to learn her magic, learn the ways of the fey she must rule, and race against the clock getting to Meanmna, the Spirit Realm which rules them all.

Book Two, Bienn-Theine is told by Mathew, Sarette’s best friend and another teenager who ‘thought’ he was just human. It’s his story of discovering who he is and what he is capable of while on a quest of epic proportions to take his rightful place as heir of the Fire realm. Eitlean, Book Three is Banee-Belle of the Air fey’s story of finally becoming the fey she was meant to be not the airhead everyfey assumes her to be.

Books Four and Five will be the stories of the Hasani the Water Realm and Pozzolana the Earth Realm; they follow the same theme, self-discovery, and some kick-butt battles. The fighting is heating up, more lives are in danger, including some fan favorites…dun, dun, dun. Book Six will be the final battle between light and dark magic and standoff between Sarette and who want to rule the Daearen Realms themselves.

Thank you about the covers! They were designed by Norman Wong. Cover design is not his day job; it’s awesome having talented friends!

The titles are actually ancient words for what they represent mostly Celtic, but there’s a couple of other ancient languages in there as well. I didn’t create a new language for the realms although they do have a different vernacular than what we humans would be used to for example they say everyfey versus everyone. I also created and named several creatures; those just were completely made up.

You also have just published the first book in a brand new series called “Fate is a Mated Bitch (Lupinski Clan Book 1)”. Is this book the start of a brand new series that is a complete departure from the Daearen Realms series? What kind of story arc are we going to experience with this particular book and where do you see the story evolving to in future sequels?

It is a brand new series and very different from the Daearen Realms. First and foremost, the realms novels are YA Fantasy Romance and the Lupinski Clan novels are a 18+ Paranormal Romance, graphic language and situations included.

The first four books will follow the Lupinski siblings, Nate, Walt, Ja’lyn, and Jeff. Their family has been in charge of a multi-shifter clan since their ancestors left the old world in search of better lives.

How they ended up in charge was that the trip to America itself was dangerous and the different species of shifters ended up banding together for a better chance survival. But when you throw in several animal species that traditionally don’t get along, chaos ensues. It was discovered that the Lupinski’s, who are a different breed of shifter than you’ve ever seen unless you count Bigfoot sightings, can exert their Alpha power over the other species, which made them the natural leaders of such a clan. Each type of shifter species and some humans too will eventually have their own books!

If any of your novels were to be made into films (or even a TV series), who would you cast in the lead roles?

Okay so, I think that the Daearen Realms would make a freaking awesome series on a channel like the WB. It would be like the Game of Thrones for teenagers, LOL! Hard for me to say that actor/actress would be a great “whomever.” My education is in Theatre; it would be up to the director and their vision. But I will say that I think Madison McLaughlin, she was on a couple of episodes of Supernatural and is currently on Arrow, would be perfect for Sarette…And I would just fall over with joy and exert my “Author Power” to hang out on the set sometimes if Jared Padalecki played her father, King Roland.

Hardest:- Being able to sit and zone out writing for hours and hours. I have a husband, kids, dogs, a home, and lots of other stuff that also need attention. I wake up at 2am most days, so I can write in quiet with no distractions for a couple of hours.

Honestly, too many to name. Generally strong women inspire me.

What sort of research did you do to write your books?

I write because I have to, I wouldn’t be me without it. I was inspired to start publishing by my husband. 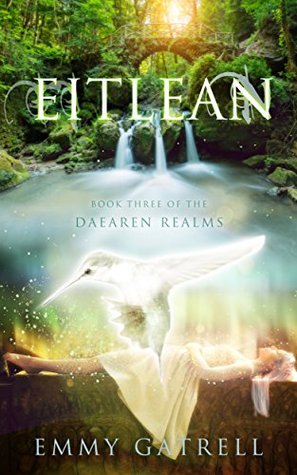 I’ll just write complete nonsense until I can get going again. LOL! I’ll switch my medium, use paper and pencil vs. a computer, and I listen to music with binaural beats to try keep focused.

What free time? LOL! I love health and fitness and am an avid bodybuilder. I lift five days a week and have a cardio only day. I also design and make jewelry and some other crafty type activities.

Going to keep writing my current series’ and I’m also putting together a Fitmom Food book and guide.

Write. Write all the time. Even when you have nothing to say! And when you discover that writing is only about 10% of the work to publish, don’t be disappointed! It’s just the way it works!

And that’s a wrap! Thank you for being a fun guest and for sharing more about the intriguing worlds in your books, we can’t wait to check them out 🙂

Thank you so much for having me!

Emmy Gatrell is a Fantasy and Paranormal Romance writer ranging from Sweet (YA/NA) through four-flame (18+).

She grew up Metro-Detroit and went to Siena Heights University in Adrian, Michigan before moving to Georgia. After spending more than a decade there with her husband, kids, and dogs. Her family realized Georgia was still too cold, and now they live in Costa Rica where its summer all year and the seasons are; kind of dry, a little rainy, and deluge. She loves her family and community, writing about things that go bump in the night, food, fitness, and bodybuilding.

Emmy has published the first three of six novels in her Young Adult Fantasy Romance Series the Daearen Realms; “Meanmna”, “Bienn-Theine”, and “Eitlean”. “Hasani” (Book Four) is slated for a spring 2017 release.

Her new series the Lupinski Clan, is a 18+ Paranormal Shifter Romance. Fate is a Mated Bitch released November 2016 and Forgiving Fate December 2016.

Emmy’s love of her roots and traveling comes out in her writing as she creates a new realm of existence with the Daearen Realms, an entirely new breed of Shifter with the Lupinski Clan and whatever else she comes up with next.

You can connect with Emmy via the following Social Media platforms:-

Still want more? Well Emmy’s books are all about eliciting a feeling of wonder and enchantment in the realms that she creates (and the word elicit is a Latin word that has origins in magic too, which makes it a relevant comparison here). For more articles on the theme of ‘Elicit‘ then check out the links below:-